Professor Helmut Norpoth of Stonybrook University says Donald Trump has a 97% chance of being the next president. That’s if Hillary Clinton is the Democratic nominee, which all the major US media have declared an unstoppable outcome. If Bernie Sanders should pull out an upstart victory (a result predicted by a Reuters poll that went unreported in the mainstream US press)? Norpoth says Trump’s odds go up to 99%.

Most of my friends say it can’t happen. I’m n 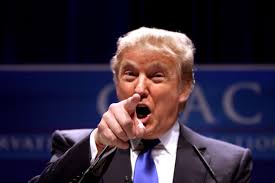 ot sure why. Seems that they have an irrational belief in the rationality of the US electorate, or at least of the US political class. Neither, in my opinion, is well founded.

Professor Norpoth has, according to himself (and Fortune magazine), accurately predicted the outcome of every election since 1912, with the technical exception of 2000, when his statistical model predicted a Gore victory.

But of course, we know what’s wrong with that exception.

There’s a school of thought that says this election is so wacky that a statistical model based on past primary results is irrelevant. That might be true, it might not. But let’s just assume Mr. Norpoth is right and Trump is the next president, which is by no means a long shot. How worried should I be about what that means?

A. Very worried – make an exit plan (Denmark, anyone?).

B. Not worried – they’re all the same.

C. Impossible to tell because no one knows what Trump really stands for.

I pick A, but not because both of the other rationales are not accurate. Here’s what we know.

1. Unlike Rubio and Cruz, Trump is not a right-wing ideologue. He’s pro-choice (http://www.nbcnews.com/meet-the-press/video/trump-in-1999-i-am-very-pro-choice-480297539914), in favor of some form of universal health care, and might even secretly be pro-gay. Well Mitt Romney was pro-choice too, until he was running for president, and was the architect of one of the most successful universal health coverage examples we have. What people like that have said in the past doesn’t really matter once they start running for president.

2. The enemy of my enemy is not my friend. Yes, Trump opposes free trade agreements, but not because they give too much power to multinational corporations or because they’re going to be bad for international labor. He doesn’t want to see smaller countries in Asia, Africa and Latin America have the opportunity to develop with democracy and without displacement. Trump says he doesn’t want people dying on the street. Well Gavin Newsom, former mayor who brought “care-not-cash” to San Francisco, didn’t want people dying on the street either, he wanted to move them somewhere else to die. No one wants people dying on the street. Trump says his great new plan to make sure everyone has health care “is not single-payer” and won’t cost any money. Which means he has no plan. Just because Trump talks about “a few people on Wall Street” who are not paying enough taxes, I can’t ignore the fact that apparently, 20% of his avowed supporters think slavery should not have ended. Or that he didn’t want to refuse the endorsement of former KKK leader David Duke without doing research because “I know nothing about white supremacists.”

3.  No one keeps their campaign promises, or even intends to. Remember, “On Day 1, I will shut down Guantanamo”? Remember, “I can end the ban on gay soldiers with the stroke of a pen”? Contrary to claims by Trump and Romney, the president doesn’t get to eliminate Obamacare or abortion rights. There is this little thing called Congress and this slightly bigger thing called the Supreme Court.

Campaigning is by definition lying. Hillary Clinton was mercilessly hazed a couple weeks ago for saying she “tries not to” lie. Any ten-year-old, said Stephen Colbert, with a live 10-year-old to prove his point, knows that when asked, “Have you ever lied?” the only answer is, “No, never.” By the same token, voters don’t want to hear, “I will attempt to get this or that bill through Congress, although I realize the odds are against my being able to accomplish it.” Maybe back in Calvin Coolidge’s day or something, but in the age of television and Twitter? No way. You’re supposed to promise the moon with a wink. Trump is great at that because it’s how he’s made his fortune. Or several, some of which he also lost, but we’re not supposed to talk about that or even notice it.

Trump will not be building any walls on the Mexican border, with or without Mexico’s money. He will not be deporting 11 million immigrants or even banning Muslims, although that he might manage because honestly, it has not been very easy for Muslims to get visas for a long time now. He won’t be creating great jobs for US workers, forcing China to stop devaluing its currency or making America great again.

So all those angry white guys (and gals, sad to say) who are voting for him in droves are gonna be mad. Even if he were doing what he said he would do, they’d be mad because even if someone really tries to fulfill their promises, changing social policy takes a long time. Economies do not turn around at the stroke of a pen. If Trump (or Sanders) did all the wonderful things he says he is going to do, it would probably take a couple or more years before people who have been out of work for a long time started getting hired. And what is Trump going to fall back on to keep that formidable anger and sense of betrayal from landing on him?

Misogyny and racism. Trump’s not an ideologue but he is a macho, woman-hating, racist. A lot’s been written and said about his “tough guy” act, and how important this aggressive form of machismo is to his appeal. (For an amusing example of this literature, check out Friday’s Washington Post article, “Has Donald Trump Actually Punched Anyone?”.) We’ve seen how he has wielded vile sexism against Megyn Kelly (someone I don’t normally feel that much sisterhood with) and Hillary Clinton and racism against Jorge Ramos and President Obama. There’s the comment about how he would like to date his daughter and and the more basic one, allegedly made to a friend and quoted by New York Magazine, “You have to treat ’em [women] like shit.” There’s his fat-shaming of Rosie O’Donnell and others), and the simple fact that he owns the Miss Universe pageant. The list goes on and on.

We also saw how Arnold (“Girlie-Man”) Schwarzenegger, Ronald Reagan and George W. Bush utilized the swagger to distract people from what they were not doing to improve their lives. We can expect more wars, more militarized policing, more ruthless rhetoric about people who aren’t making it. The divisions that gave us a weekend of stabbings and Klan rallies in California and the murder of Sudanese immigrants in Indiana will intensify, as will verbal and physical abuse of women and kids. And unfortunately, it works. When white men have nothing else to feel good about, feeling like part of the biggest, baddest, toughest team on the planet seems to appease them. And eight years of that I cannot abide.

I have been fighting the power for 30 years, with limited success but a lot of passion and fun. From 2002-2005 I spent a lot of time living in Palestine working with a women's peace group, and while there got the idea for a murder mystery. So I set up this site to serialize this novel and its sequel, which I've been working on ever since I was deported in 2005.
View all posts by Kate Jessica Raphael →
This entry was posted in Feminism, Politics and tagged Feminism, Politics, Trump. Bookmark the permalink.